(Old friends need not apply, you're already in bbs!)

a_war_of_roses, an interactive landcomm based on historical fandoms!
Apply here to join Team Red Rose or Team White Rose, and tell them femme_slash_fan sent you!

A little bit about my life and the fandoms that have saved it through the years:

Womenverse is a landcomm for women of all sorts of fandoms, come and play:

Sometimes Cain wondered if Gina was even aware of what kinds of feelings ran through her when she saw her. She wondered if the woman, the frakking cylon had ever once thought she was aware of her movements, her touch, her kiss.

She had shaken off the feelings and moved to dress, combing her hair back and tying it there. She had paused, looking in the mirror before heading down to her office, finding herself unable to stand the idea of work and instead making her way to the detention area.

She had stood there, watching the beatings, her heart, what was left, tearing with each and every scream. She had always known that she would hurt if she came here. Now she wondered if she dared break President Roslin’s sacred frakking rules.

Her voice broke the silence that had fallen. She had glanced down, just once, at Gina.

She had glanced down again then, her voice soft.

“Come, we’d better get you off the ship.”

She was trying, so hard to avoid looking into Gina’s eyes, she knew the woman had to hate her, at least a little. She had looked down and away, guarding her emotions and pushing away her anger and sadness. She was known to be heartless, and now she found herself wishing she was.

“I forgive you, Helena.”

They had made it to the smaller ship now and before anyone had a chance to see her or Gina she had entered, then pulled the woman aboard before working to pilot the craft, glad she knew how to fly it.

She had been glad to get them out of the way, away from all the other eyes. She really wished she was brave enough just to end the woman’s misery, but she wasn’t. Not now.

The word was almost explosive as Helena, Admiral Cain, pulled away.

“Gina… how could you ever forgive me?”

“I just… I care about you Helena. I always have.”

“I hurt you, I let you be beaten, almost killed… not to mention…”

“I know. I also know how you feel about Cylons.”

Gina’s voice cracked and she spoke softly after that.

“I… How can I be sure you weren’t just programmed to say that?”

“Because I still love you. If it was a programme… it would have broken by now.”

Helena had met her eyes then, her voice low.

“I must be completely frakking mental.”

“I forgive you Gina.”

“Gina. Please… I’m still trying to let go of the past.”

Gina fell silent then, silently watching Helena before she moved just a couple of inches closer. The moment seemed to stretch until Gina finally took Helena’s hands in her own, her voice soft.

“I hurt you just as much… if not worse, please don’t keep apologizing to me.”

Helena had remained silent, her voice breaking a little when she finally spoke.

The level of awareness that had just been shown, so frankly, to her, had surprised her. She found herself struggling to speak now. Her eyes filling with unbidden tears.

“I… Are you even aware how much… how frakking much I love you?”

The one word, Helena’s name, had been softly spoken, the warmth of the name, the word, was enough that Helena found herself fighting back further tears.

“Are you even aware how much I love you?”

“Helena… you are so… frakking beautiful. So… special.”

“Helena, I mean it. I don’t think you even know… are even aware how much love and beauty you’re capable of.”

Gina had pulled her closer then, ignoring Helena’s curse as she let her lips brush Helena’s neck. Then up, slowly up, toward her ear.

“I love you Helena.”

Helena had been unable to say a word. Even one. She had felt Gina’s lips on her neck, her hands, those small, fragile and bruised hands slipping around her waist. She had given in then, giving herself over to Gina, completely letting her guard slip from her.

For the moment. I'mma go friends-only the second people spam me though. 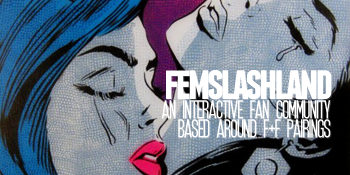 Become a part of Team Canon, Team Crossover, or Team Subtext, and participate in weekly games and challenges based soley around femslash pairings in movies and TV. Every fandom and f/f pairing is welcome. Come join the fun! Apply now!

The Beginning Of It All.

Oh, and tell them Femme_Slash_Fan sent you.
Collapse